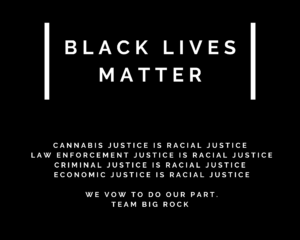 As our focus at Big Rock Partners is of course anchored in the cannabis movement, to echo statements from The Last Prisoner Project: “Cannabis justice is racial justice.” In solidarity with so many Americans who are fed up with the inadequacies in our system, we are compelled to share our reflections on the recent deaths of George Floyd, Ahmaud Arbery, Breanna Taylor and the many thousands of African Americans before them killed by police brutality and systemic racism. The broader conversation that it has set off about racial injustice in America is critical.

In its best form and in accordance with the United Nations Declaration of Human Rights passed in 1948, our country affords that “all human beings are born free and equal in dignity and rights.” Many civil and class action lawsuits are now underway in courts across America which will surely result in some shifts to our laws and their enforcement, as civil and constitutional rights of those victimized citizens are scrutinized under due process. Individual hate and bias however, do not pause for due process, and laws are interpreted and enforced differently based on who they are applied to.

It’s therefore also imperative that leaders – political, religious, and business – must also be emboldened to evaluate their own influence and act immediately to assert shifts in their models and practices. A society that so blatantly fails to apply equal opportunity within its most core institutions: law enforcement, education, housing, healthcare, nutrition, criminal justice, and economic development, is no more equal than it is just.

Based almost entirely on racist propaganda and misinformation, Congress banned cannabis with their approval of the “Marihuana Tax Act of 1937.” Since that time the march towards cannabis legalization has seen allies across the broad spectrum of our society: black, white, brown, straight and LGBTQ, progressive and conservative.

Still, injustices have been perpetrated against farmers in the hills of the Emerald Triangle to the streets of the American metropolis, with countless inhumane incarcerations justified by our countries failed “war on drugs.” 15.7 Million Americans have been arrested for marijuana offenses in the last decade alone, and while use is even across blacks and whites, black citizens are on average 3.73 more likely to be arrested than whites, and in some states up to 8.5 times. And now paradoxically, predominantly white men and those with generational wealth are benefiting financially from the new market, many of which are looking for short term gain and have little commitment to the longevity of the market, while legacy leaders, many of them POCs, have seen a much harder path establishing their footing, and while 40,000+ people still remain in jail for activities that are now legal in many states.

We also want to reflect on the hardships of those businesses in our community who were recently attacked by organized criminals that are taking horrific advantage of the warranted public outcry. Cannabis businesses across California have been vandalized, robbed, and utterly destroyed. Specifically in Oakland – approximately a dozen social equity owned businesses have lost everything. Many of these business owners have put their entire life savings into forming these legal businesses in a process that is unfathomably inefficient and expensive. Oakland enforced a staggering 10% local tax through 2019, with 30% of that money going to law enforcement. Yet these businesses were left to their own devices while days on end, their businesses were attacked. If local and state political leaders and law enforcement do not prioritize the social equity program and the security of cannabis businesses, many if not all of these businesses will perish.

As an industry, we simply are not doing right by our black and brown communities nor by the plant. As business leaders in the cannabis industry, we at Big Rock Partners are committed to examining our model and being a part of the solution. To start, here are a few actions that we are taking:

And this list of organizations posted by the Minnesota Freedom Fund.